Reached Vienna yesterday evening. It is a nice, clean, low crowd, cold city. Walked around the city till midnight.

The Day 1 of the hackathon started with a welcome session. Organizors explained about the event. Then, mentors introduced themself and many people pitched for working together with their projects. 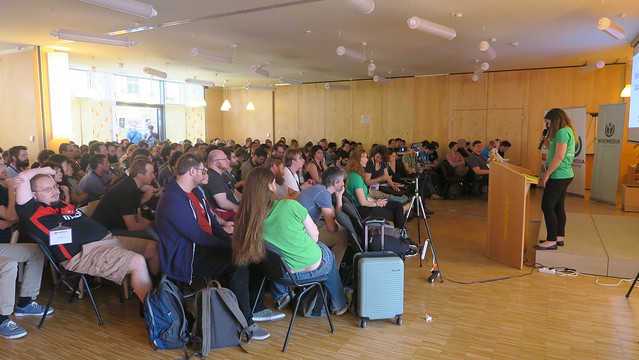 We are 260 participants from 48 counties. This is the very first time, I work with these many multi country people. Though we are from around the world, everyone followed friendly space policy. It gave a good feel of being with my own friends.

After the intro session, I was roaming around the halls/sessions to find a team for me. I did not even know what project to do. Was thinking on few issues on the task board.

1.
Met Abbas and Ibrahim in Cafe. Abbas is from Iran and living in Austria. He is a Journalist. He explained the issues faced by refugees. It takes around 5 years for them to be accepted here as refugees. Till then, they can not work anywhere. They have to live politely here. He is thinking of making them to contribute for wikipedia and get good score from the wikimedia austria, so that they can get some goodwill and faith to get accepted as refugee. 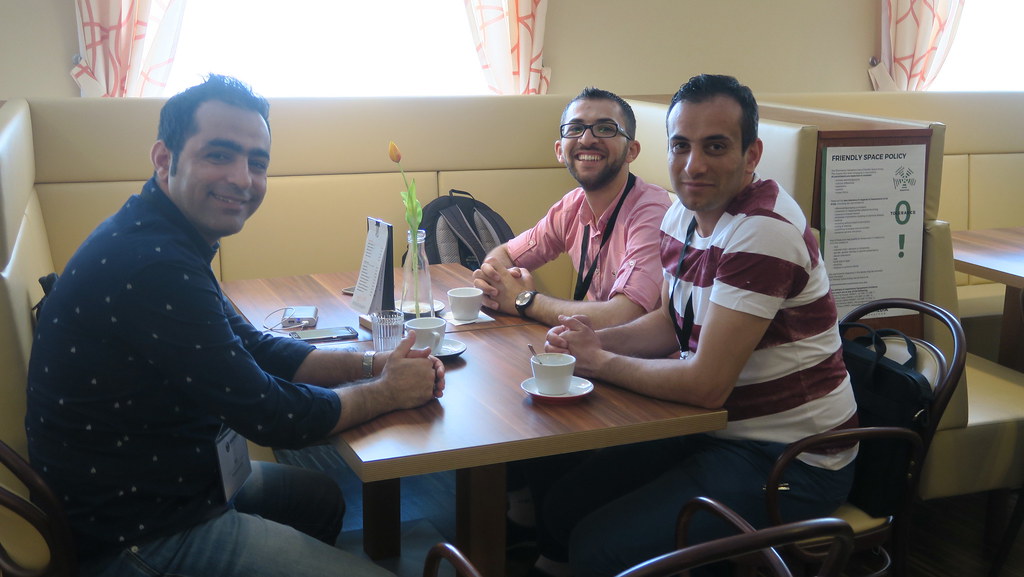 He spoke about how the arabic wiki community is growing slowly and the issues they face. It is similar to Tamil community’s issues and growth.

2.
Met Praveen. He is an indian student who studies masters here. He is an iOS developer. Gave some project ideas like audio recording app for wiktionary for iOS. He is interested on this. Routed him to the newbies intro session to wiki development. 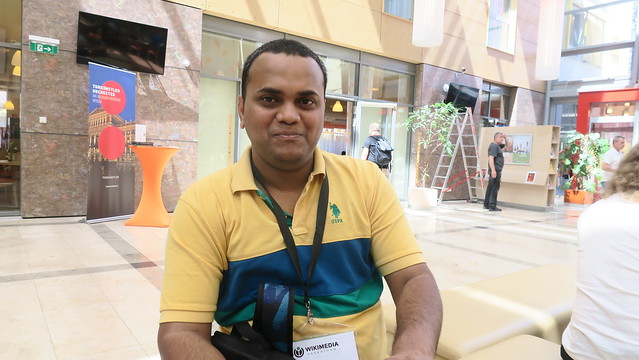 3.
Met Aaron Halfaker. He is the developer of ORES. An Xray engine for the wikipedia. It can be used to determine the edits are good or bad. It involves machine learning based on the manual scoring training. Asked him, if we can use it for Tamil wikipedia. He demonstrated how it works. Will attend his session tomorrow for a deeper demo. He asked me to collect the list of bad words in Tamil and to collect the patterns of the pages we delete in Tamil Wikipedia. Will explore on this further. 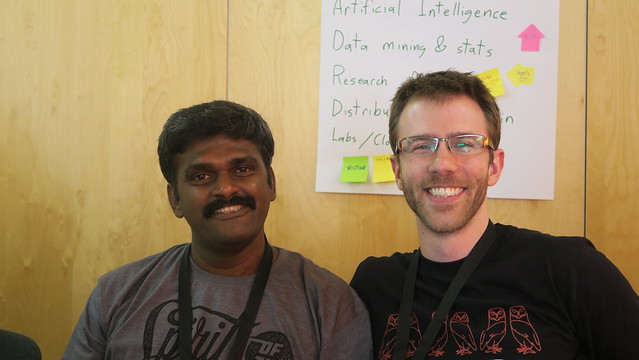 4.
Met the Magioladitis, the developer of AutoWikiBrowser. Happy to know that they are working on a web version of it. They are using javascript to develop it. Wished and thank the team on behalf of GNU/Linux users community. 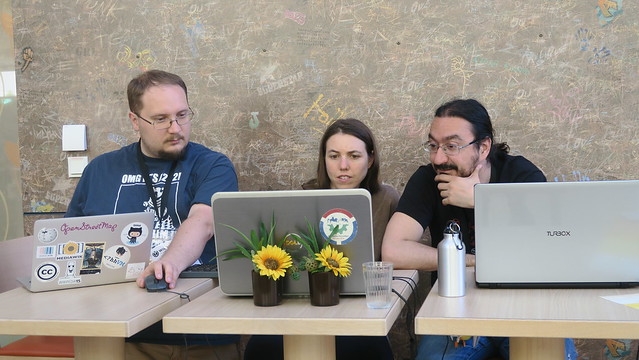 5.
Had a discussion with Maxlath, founder of http://inventaire.io A book inventory application based on the wikidata. He uses wikidata to get all the info about the books automatically. Explored the site and gave few feature requests so that all of us can use the site. 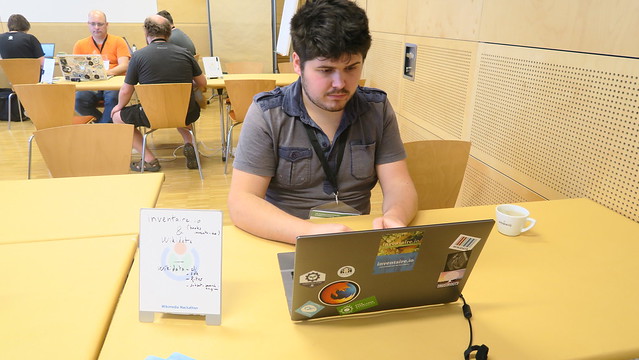 This is the very first community event for him. He asked why you guys are contributing to wiki and other open sources. 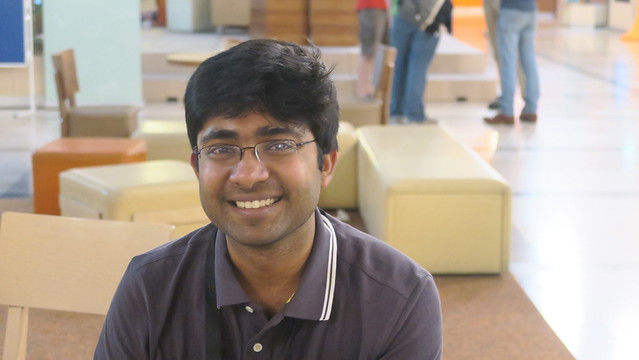 Explained him how these open source projects are helping indian language communities to grow and how programmers can help to the core wikipedia content contributors.

Dear photographers. Wait for few more days. The mass upload tool for windows is on the way. Vivek, Spend some time on this in the upcoming days.

9.
Found Hugo Lopez, from France, who is working on a Massive Open Audio Recording Project, LinguaLibre Got the  source and tried to install. Got some issues on installation. Will fix it soon. 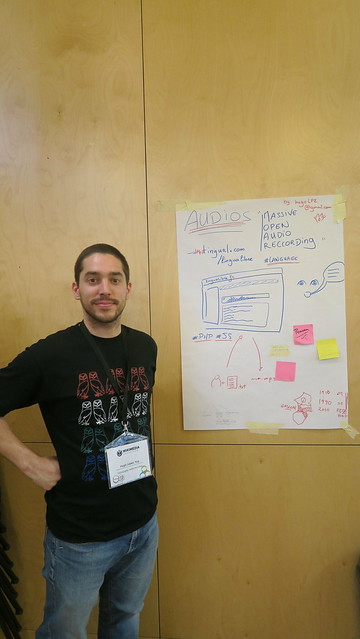 He is a linguist, teacher, OSM, wikipedia contributor. He found his anchestors language Gascon, was destroyed by the french, just to promote french as one language form France. In 1910, there were 6.7 million people who spoke Gascon. In 1990, it is 2.11 and in 2010 it is only 0.2 million people who knows Gascon. The French government pushed french everywhere. School kids were beaten of gascon or any other language was spoken except French. This is how a language dies. The same thing is happening for Tamil. To kill and to promote Hindi as one national language, Indian government is doing all the things, it can do.

Huge found Lingua Libre, as a great tool to preserve the languages. We can speak any words and it can record all the sounds. This is the one web application I am dreaming of so many years. And it has been done already. Agreed to add few features like connection with commons and wiktionary. For this have to learn PHP. But it will be worthy effort to add more features to this.

10.
Met Johan Uhle from mapbox.com. He came with his cute girl kid. Asked him about the workflow, tools for translating the OpenStreetMaps in Tamil. He is wondering to know these possible with mapbox and the localized maps are happening slowly. 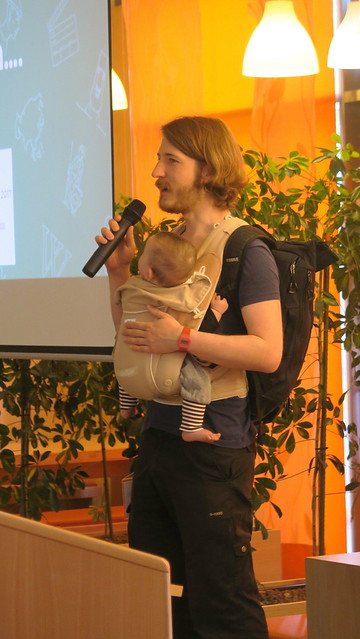 Evening was filled with fun events with Karoke. Enjoyed the songs sung by various people. Had dinner with fun discussions about marriages on India VS Europe, education systems etc.

There were many sessions for newcomers, wikidata, semantic wiki, and more. Will plan for attending few talks tomorrow. Wikidata is getting more like a rockstar. Seems it can do tons of magics. Will explore it soon.

The day 1 is ending now. Its around 12.00 midnight. Hearing the “Wow.Awesome” sounds from the Karoke floor. Still they are singing. Going to join with them for a group song now. See you all tomorrow.